Otherwise: WASD Movement, left/right arrow keys camera motion, page up and page down for camera zoom, shift + page up and down for minimap zoom, M for minimap mode toggle, backspace in combat to reset position, enter or mouse clicks on ability then in scene area to use ability.

Project ARD (prototype) is a bare-bones prototype for a tactical dungeon-crawler I've made over the last 2 months.

Currently there is no AI, nor stats screens or inventory or any of the great big RPG features, as I've focused on trying to get a basic combat system and exploration system in.

There are certainly issues and confusing things, taking feedback and things people would like to see in a game like this.  Will be working with a few people to try and make something from this prototype soon.

Currently the prototype has no built-in goal except to test combat possibilities.  Have fun with what is there.

Note: ideally, encounter mobs would patrol set routes and spawn more intelligently.  As is, they can mob up pretty badly. If you get several in a row in the same spot, its bad RNG.

How the system works:

Each character has Turn Units that count up to their Turn Unit max by their TU Speed.  When the character reaches their max, they become active in battle.  Meanwhile, while no characters are active, time flows normally and arrows move, fireballs move, traps activate, and roaming monsters roam, etc.  The idea is to have a realtime with turntime hybrid system, with characters being able to intercept arrows targeted at a squishy ally, and that sort of thing.

Actual TU is spent in a combat action like so: First, the TU for each/any move is subtracted from the units current total.  Then, the remaining TU is either halved, thirded, or quartered, depending on the Move status (none, adjust, run).  This is represented in the TU stat on the left in the status panel: as is, this is pretty confusing so I am looking into a way to make this work better.

Actual actions per round are currently limited to a single action.  Multiple actions could be possible later, I am keeping things simple for now. 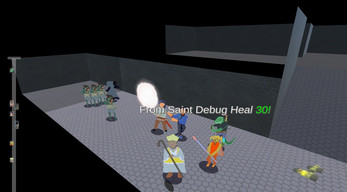 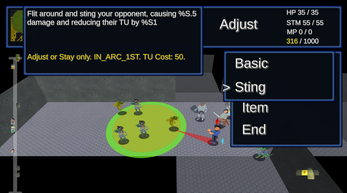